In the mountains of Poland, 26 children traumatized by violence get a chance to be kids again at Rotary camp

Beneath the emotional scars of living in a Ukrainian war zone, Mykyta Berlet flashes the same mischievousness of any other 12-year-old boy headed to camp.

He wants to laugh, play pranks and on the last night of camp “we will cover everyone with toothpaste,” he says excitedly.

Mykyta and 25 other Ukrainian youths headed to the resort town of Zakopane in the foothills of southern Poland are naturally focused on fun. But their two-week respite organized by Rotary members has a higher purpose: To help the children heal and cope with the trauma they may encounter when they go home.

Each camper has a parent or sibling killed or injured in the fighting in Ukraine. Psychologists at camp will guide them along the way during an itinerary that mixes escape and therapy.

Olga Zmiyivska, a member of the Rotary Club of Kharkiv Multinational in Ukraine, has brought children to the camp for two years and has witnessed its impact.

“After the trip, they are more willing to make contact and open their hearts,” she said.

War came into their homes

Thousands have died and millions have been displaced by the fighting between pro-Russia rebels and the Ukrainian military in eastern Ukraine.

Growing up in the shadow of that nearly four-year conflict, most of the campers don’t remember a life without war. They tell unrealistic stories about battles and keep silent about real horrors. Some are guarded and hypervigilant. Others endure sleepless nights or nightmares. A few withdraw and emotionally shut down.

In Zakopane, nestled in the scenic Tatra Mountains, Rotary members give the children a chance to heal in a peaceful setting. The children sleep in comfortable cabins along a pristine lake flanked by green, rolling hills.

The program, called Vacation 2017 Zakopane: Well-Being for Ukrainian Kids, includes traditional camp activities and field trips along with support from mental health professionals. More than 100 children have attended over the past four years.

This year’s campers visited a mountain village to learn about local traditions, toured historic Krakow, and saw the castles, salt mines and hot springs of southern Poland. The routine activities are simple but powerful.

Yuriy Paschalin and Vlad Tsepun, both 12, became close friends after their fathers were killed by snipers. The field trips helped both boys start to relax and act like typical, curious children.

“This program allows these kids to stay kids and to live children’s emotions,” said psychologist and art therapist Olha Hrytsenko.

“They will observe and absorb another culture, attitude, and language, (and) will be able to compare and make conclusions about what is good and what is bad. It will help them to find themselves.”

When asked about their families, the children often talk about their parents, siblings, grandparents, and even their pets. Then the looks in their eyes change. Glints of childish fun disappear, along with any fussing or fidgeting. Instead, there is obvious pain behind their faces. And silence.

Like many children, 11-year-old Dima Tkachuk doesn’t want to talk about his dad’s death. Talking about death makes it all too real.

A person will always remember the loss of someone whom he or she loved. The task is not to forget but to find the essence of this loss and to learn how to be happy after this.

Dima, though, shared a glimpse of the stress on his family. He explained that since their mother left to join the fighting, his 18-year-old brother has turned to smoking and drinking alcohol.

“Sometimes he does things that one cannot be proud of,” Dima said.

The psychologists and camp staff know not to pressure the children to open up. Instead they build trust through group games, outdoor activities, art therapy, and individual counseling with psychologists.

When a breakthrough does come, therapists listen or just sit quietly as the tears flow.

“It always takes time to survive loss. This time is needed to run the processes that we name ‘grief work,’ ” says Hrytsenko.

“A person will always remember the loss of someone whom he or she loved. The task is not to forget but to find the essence of this loss and to learn how to be happy after this.”

At the Zakopane camp, Valerie Tkachuk, 12, from Dnipro, Ukraine, was slow to trust others. Her answers were often short and sharp.

Her father was injured in combat while her pregnant mother was home caring for the family. Valerie shrank into herself, stopped communicating with peers, and started sleeping in her father’s sleeping bag on the balcony.

“That year was the most difficult in my life,” Valerie said.

She was asked to close her eyes and remember the most pleasant memory of camp in an effort to make her smile for a photo.

Eyes closed, Valerie started crying and opened up in a way she had not previously at camp.

“I am disturbed about my dad, as he is stressed for mom. And he is forbidden to have any stress, as he can have a heart attack,” Valerie said.

Valerie dreams of following her father’s path and becoming a military officer.

Many children who grow up with war are drawn to the military. Their vulnerability, feelings of helplessness, and lack of trust make the strong image of a soldier appealing, experts say.

Dima is set on a career in the army. Sasha Kruglikov, 9, whose father was killed in the conflict, already views himself as a soldier. He likes wrestling and karate and said he wants to defend his country when he grows up.

Creating a place to heal

When the conflict in Ukraine began in early 2014, Rotary members stepped up to help.

“We thought, why not organize vacations for kids whose childhood was affected by war,” says Ryszard Luczyn, a member of the Rotary Club of Zamosc Ordynacki, Poland.

Barbara Pawlisz, of the Rotary Club of Sopot International in Poland, and Łuczyn got support from the Poland-Ukraine Intercountry Committee. Rotary’s Intercountry Committees are networks of Rotary clubs in at least two countries, and they often work together on service projects or to foster peace between the residents of countries in conflict. Rotary clubs in Belarus, Poland and Ukraine participate in the network.

The Well-Being for Ukrainian Kids project started in 2014 with mixed results. The children, ages eight to 17, didn’t always get along. Their war trauma was recent, and communication between the age groups was difficult.

The Rotary members recognized adjustments were necessary, but they were not deterred.

Since that initial effort, organizers narrowed the age range for campers to six to 12, and the number of Polish Rotary clubs that support the project has more than doubled to 83.

Rotary District 2231 in Poland raised money to pay the travel and lodging expenses of the children and their caretakers. The project has also drawn support from clubs in Sweden and Slovakia. Ukrainian clubs were involved in selecting participants from all areas of the country.

“It is always very difficult to find affected children in small towns and villages. So we appealed to all the Ukrainian Rotary clubs to help us,” says Anna Kaczmarczyk, a member of the Rotary Club of Zamosc Ordynacki, Poland. “Now we have children not only from large cities, but also from distant parts of the country.”

The changes in the children are obvious, Rotary members say.

Kaczmarczyk is the first person to meet the children in Lviv, Ukraine, when they start their trip. They may be nervous, which can make them irritable and aggressive.

But after the program, they are relaxed, smiling, filled with a new self-confidence.

“We continue this program because we know how these children react, how they change, how they become more open to the world, and how they look at the world the way it should be for a child,” Kaczmarczyk says. “War takes from them their childhood. And they still have their children’s dreams.”

After the children return home, they send letters and pictures about their camp experiences to program organizers and Rotary members.

Children have drawn portraits, colorful scenes of nature, castles and the kings and queens who live in them, and dragons. Sometimes, they write letters about what they observed. One girl marveled at the clean streets and friendly people.

Whether they are magical stories or practical observations, the children carry warm memories home with them.

Kids who experience violence can be prone to violence themselves; this program shows them a different path.

“After such traumas as car crash, natural disasters, [or] wars, people often go to two extremes: Either they stop being afraid of everything or they start being scared of everything. I think these children will belong to the first category,” psychologist Hrytsenko said. 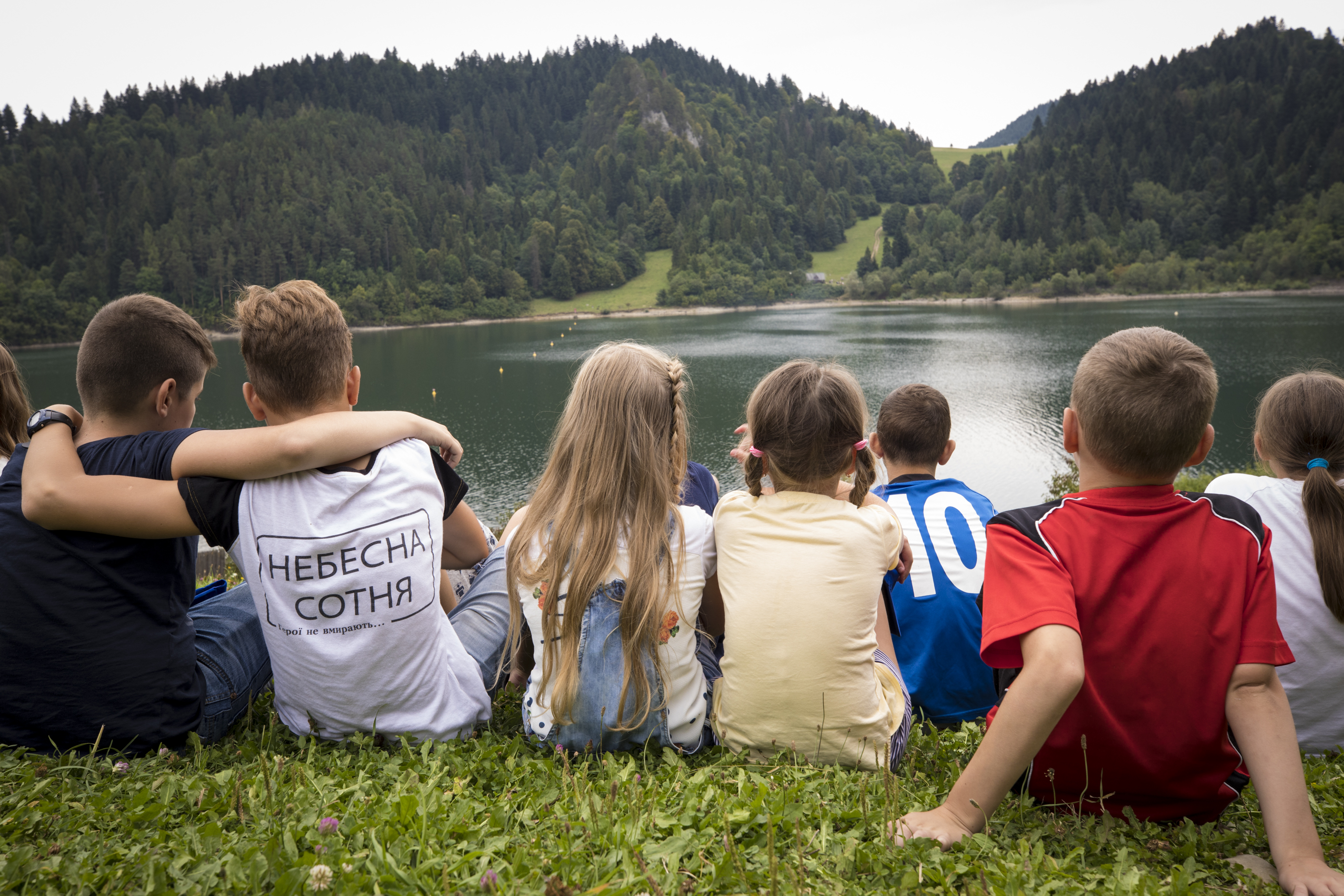